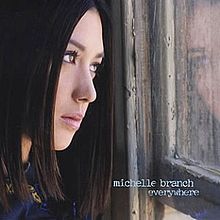 Another really difficult challenge. A song with many meanings… I have struggled and so I’ve gone a bit leftfield with this.

Everywhere has some of the best lyrics (“‘Cos you’re everywhere to me and when I close my eyes it’s you I see”) and it was a song that was played at my brother’s wedding. But it also appeared in a hilarious scene in one of the American Pie films and so it also works as a mindless soundtrack song.