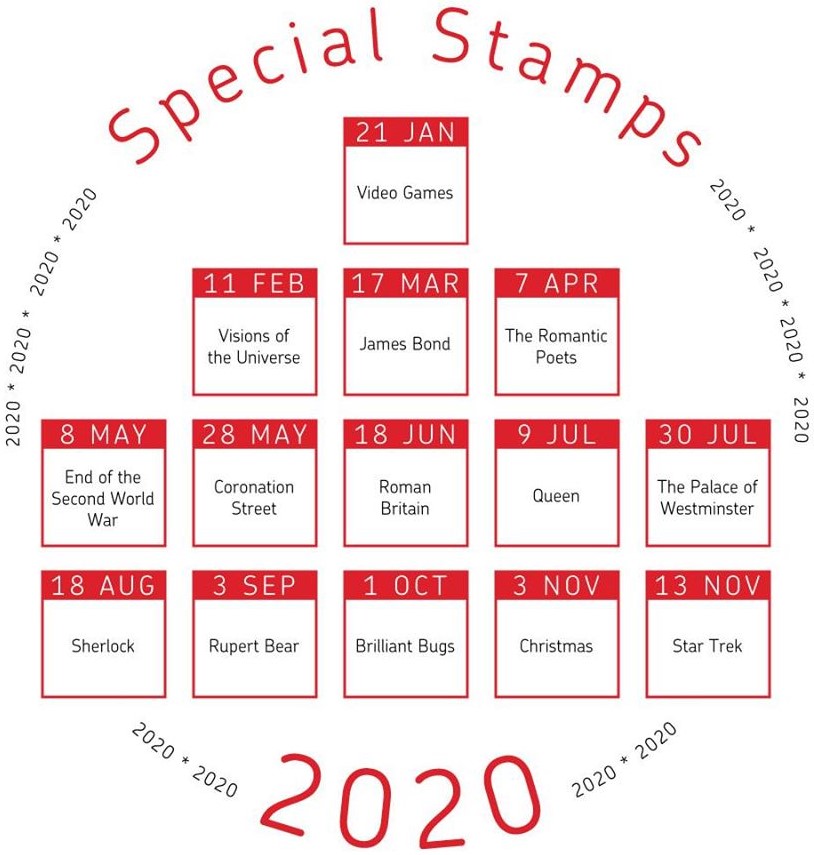 I decided that I would look into collecting commemorative stamp releases.

There’s something about the idea of these stamps that appeals to me. It’s a bit nerdish; a bit quirky. It’s probably not something I’d own up to in the pub. But having bought some Star Wars, Harry Potter and Game of Thrones in the last few years and displayed them in frames, I quite like the idea of adding to my collection.

I always figured that the stamps might actually be worth something one day. Maybe they will one day, but not for many years.

So, I am purely doing this because I like the look of them. I’m not intending to collect every set released, but only the ones I think look cool.

The 2020 Royal Mail release schedule has been announced.

Without having seen most of the stamps (in fact, only the Video Games collection have been announced), here are my thoughts:

Video Games – these look REALLY good. The games featured include some of my childhood favourites including Dizzy, Sensible Soccer, Worms, Lemmings and Micro Machines. These have already been ordered!

Visions of the Universe – not sure what this will be. I probably won’t be buying these.

James Bond – definitely on my wish list! I love James Bond films, so these will be a great collector’s item.

The Romantic Poets – I hate poetry. No chance.

End of the Second World War – these sound interesting. I might buy these depending how they look.

Coronation Street – I don’t watch Corrie, so I will give these a miss. If Neighbours stamps are released though…

Roman Britain – I’m not a big lover of history. I doubt that I will buy these.

The Palace of Westminster – I hate politics right now. I don’t want to have stamps reminding be of Boris.

Sherlock – These sound intriguing. Again, it might depend how it looks. I’m not a massive Sherlock fan, but I did enjoy the BBC series. One to think about, maybe.

Rupert Bear – I didn’t even know this guy was still around. If stamps have been announced, does this mean he is due a comeback? Will yellow scarves be back in fashion. I might consider the stamps for nostalgia.

Brilliant Bugs – I don’t think bugs are brilliant. Not for me.

Christmas – Can I shock you? I like Christmas. These always make a nice set.

Star Trek – Not for me – Star Wars all the way. I liked the JJ Abrams films, but that’s about it.

So I’ll definitely buy four and maybe two or three more of the fourteen sets that will be released this year. Which ones do you have your eyes on?