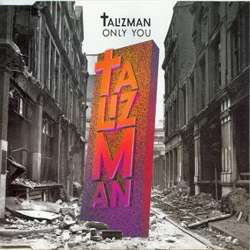 One of my favourite dance tunes ever is Talizman’s ‘Only You’. I tried to find out more about the history of the song.

Talizman recorded Only You originally in 1993. This is a song you probably heard but never knew what it was called. That was certainly the case for me. I remember hearing it when I was out – somewhere in Chester. This would have been, probably, in around 1997 or 1998. I can clearly vividly recall walking down the stairs when it came on and asking one of my friends if they knew what it was. They didn’t. But it was somehow etched into my brain. And I didn’t hear it again until 1999 when a cover version came on the radio. We were on a minibus on our way to a nightclub somewhere or other.

Kick off your shoes and let’s blow our minds together

The cover version was by Ca$ino and I thought it was great. It was a song a played a lot. There was something about it that I loved – you didn’t often hear a male voice on a dance tune. Maybe it was that?

There was always a nagging feeling that the Ca$ino version would do but it wasn’t the one I remember in the club.

I want your love

I want it right now…

Because in my world there’s only you

I was determined to track down the original and eventually I managed to connect it to a song by Talizman. I think it was when I was using Limewire and I was trying to digitise my music collection. But the version of song by Talizman was nowhere near as good. I couldn’t understand – the version I recalled was SO much better than this. I later bought the CD and the version I remembered was not on there either.

So why has this amazing tune never made it big?

According to Discogs, the song was first released in 1993. It was written by A. Webb and C. Martin. It would appear that this was the only song they wrote, although, of course, they are credited as the writers of the Ca$ino cover.

It must have been re-released as it then charted at Number 88 in 1994. This was its only foray into the charts.

It was re-released in 1995, this time with the Chris & James remixes. There was also a Grinstretcher Club Mix too. Not sure what that sounds like.

I honestly can’t get it. This is a tune I love and I think is amazing but it’s like no one else has ever heard of it!

Not long after writing this post another cover of Only You was released. This time, dance artists Cahill released a version, featuring Craig Smart on vocals. It has more of a beat than the Ca$ino version but is still nowhere near as good as the original. The Apple Music song info reveals a little bit more information about the composers: their first names! Apparently it’s Ashley Webb and Colin Martin.

The WhoSampled page says that the song samples the Talizman original. This is all of the information that I can find out!

Update: October 2020
It was interesting to discover this interview with the remixer Chris, from Chris + James:

“Talizman – only you, it sounds at first like its going to be a bad karaoke attempt, but it develops into what is a beast of a track unlike any other out there. What was it like working on it?

We used to play the original mix years ago in warm up sets and it stood out as being incredibly different even then, but it was way too slow for peak time. Charlie Chester rang me up and asked if we’d be interested in doing it……..we were dead keen but the vocals were so off key in places that it wouldn’t be straight forward at all. Once the parts arrived it was almost painful to listen to the acapella! Anyway I had an idea for making the ultimate Balearic house track – utilising the Bocca Juniors ‘raise’ piano line and the Bassheads ‘Is there anybody out there ‘ bassline…..thankfully James Wiltshire managed to work out some chord sequences and we had it nailed within a day and a half. Unfortunately James Bradley was absent for the making of this, first he heard was when I played the finished mix back to him.

It’s not surprising that mix has stood the test of time – people have covered it and remixed it without even getting close to the C+J mix- a classic case of remixers bringing far more to the remix than just a few loops!”

(Charlie Chester was the co-owner of Cowboy Records, James Wiltshire was one half of Phats & Small and James Bradley is one half of Chris + James)

3 thoughts on “Talizman – Only You”