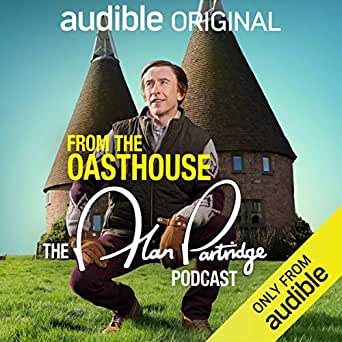 I am a massive fan of Alan Partridge.

Today the new AP podcast series is released on Audible and I cannot wait.

To celebrate its release, I have ranked the Alan Partridge output from least best (there is no worst) to most best (not an actual phrase, but it helps make my point). I’ve not included the Comic Relief specials as they vary so much in quality.

On The Hour
I am not very familiar with this, so it must rank lowest.

The Day Today
This is great – there’s just not enough Partridge!!

Knowing Me, Knowing You With Alan Partridge (radio)
This is so funny! It’s only so low on the ranking because everything else is so good! Stand out moments include the scene with the child prodigy!

Open Books with Martin Bryce
An underrated classic! I love Partridge’s facial expressions in this!

Alan Partridge’s Scissored Isle
Such a funny documentary. Stand out moments include the supermarket scene (“Do you need any help packing?”) and (“Look, just think about lowering your rates of interest!”.

This Time with Alan Partridge
Partridge’s most recent output gets better and better each time you watch it! My favourite parts are the exchanges with reporter Ruth Duggan. And also Alice Clunt Fluck – I see what I did there.

Alan Partridge: Alpha Papa
Not always rated very highly, this still makes me laugh! It is just easy watching and it is great to see Partridge on the big screen! The soundtrack is also great!

Mid Morning Matters with Alan Partridge
Such a brilliant couple of series – so varied in content. There’s several stand out moments per episode. “Inception” is probably the most quoted!

I, Partridge: We need to talk about Alan
I have read and listened to this book so many times now and yet it still makes me laugh out loud. It is so well written – classic Alan. I love hearing all of the events from I’m Alan Partridge from Alan’s point of view, which of course is never what actually happened.

Alan Partridge: Nomad
I wasn’t sure if they could top I, Partridge, but they have and it is superb! I love the part with his swimming pool dual with the pensioner and the part when he interrupts a live recording of the One Show!

I’m Alan Partridge
It had to be, didn’t it? Twenty-three years since it was first released I still quote lines from I’m Alan Partridge almost on a daily basis. It is still laugh out loud an it still feels up-to-date even after all this time. Just brilliant!