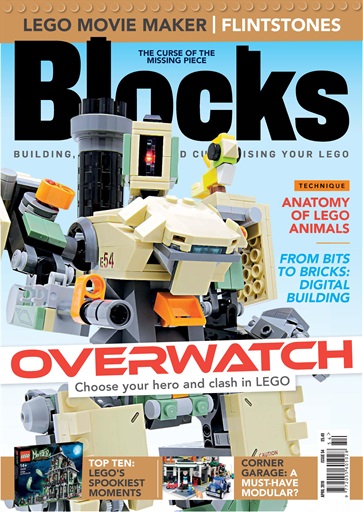 As someone who loves Lego but can’t really afford to buy it one way that I can get my fix is to read Lego magazines. Here’s a brief review of two that I have found.

This is the newest magazine. I read issue 3 and I bought it online. It costs £5. The magazine is A5-sized. I think this probably causes problems for it. It makes articles shorter. It is considerably smaller in size than other similar magazines.

I like how current the magazine is, including features on The Lego Movie 2 and one on how Brexit might affect Lego supplies. There are interesting articles – I particularly enjoyed the report on how the Darth Vader minifigure helmet has changed, how to tell a genuine from a fake Deadpool figure and the love for a 1×4 tile piece. The report on the effects of combining up to four sets of Harry Potter Quidditch sets was my favourite although it was overlong. If I’m honest though, most of the reports were too short and I am not in the slightest interested in Overwatch, although that’s my personal preference. At 80 small pages long there just wasn’t enough in Brick Fanatics to keep me interested for more than a few minutes.

I feel harsh in not rating the magazine but I hope it develops as time goes on.

I’ve been reading Blocks for a while now. It costs £5.40 per issue and until recently I have had a subscription. At 120 pages and A4-sized it comes in as a much more substantial publication. I reviewed the April 2019 issue.

I enjoy the round up of Lego news and upcoming releases. The articles and features feel substantial and have great pictures accompanying them. I liked the Lego plant feature written by Lego Masters Series One winner, Steve Guinness.

The Top Ten of spooky Lego feels a bit odd in April rather than October but I enjoyed it. It was interesting to find out how sets don’t have pieces missing.

There was lots of Overwatch in this edition which I am not interested in but there were lots of reviews of other sets which meant that I wasn’t bored. The feature on building animals was great!

Overall, Blocks is definitely the superior magazine. There’s something for Lego loves of all ages.

A few years ago I bought the magazines Brick Culture and Bricks which I loved both – particularly Brick Culture. I extended my subscription for both and then the publisher went bust and I lost money. I was more gutted that both magazines ceased to exist.