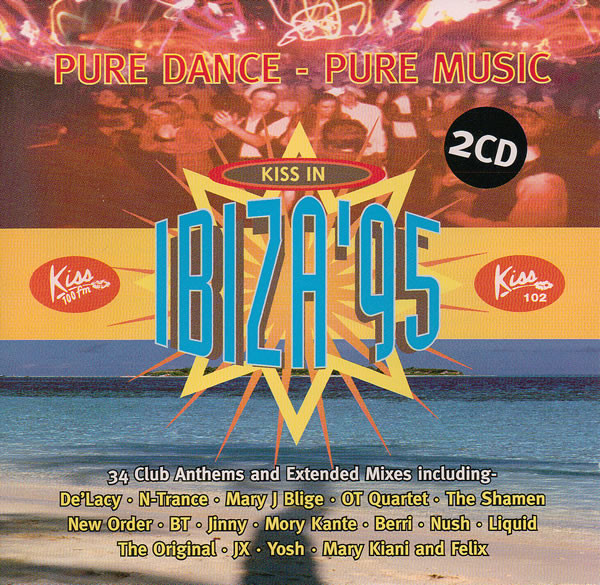 A celebration of the classic dance compilation album of 1995.

1995 was an important year for me. It was the year that I left high school. It was one of the best summers ever, spending lots of time with friends, listening to music, watching TV and doing nothing!

It was the year that I got into dance music in a big way and Kiss In Ibiza ’95 was my favourite album of the autumn as it included my favourite dance songs of the summer.

I bought a copy recently on Discogs and thought it would be fun to celebrate the music on it!

This is the best CD – most of the best songs are on here.

De’Lacy – Hideaway – one of my favourite songs ever. It still sounds amazing. It needs to be loud so that you get the full effect of that bassline.

Nush – U Girls – A great song – an underrated classic.

N-Trance – Stayin’ Alive – The rapper Ricardo Da Force (probably not his real name) gets a mention. To be fair, he deserves it. This is an unbelievable song. And his rapping is some of the best ever!

Isha D – Stay (Tonight) – An underrated classic. It never actually made the charts. But it is well worth a listen.

Mary J Blige – Mary Jane (All Night Long) – This was the first time I’d heard of Mary J Blige. The Bottom Dollar House Vocal Edit was the version featured and it is great. The original version is not great.

OT Quartet – Hold That Sucker Down – An absolute monster of a record. It deserved greater chart success. But it is an enduring classic. It charted in 1994 and again in 1995. For some reason it reached Number 45 in 2000 as well. This song is best at full volume.

The Shamen – Destination Eschaton – Not one of my favourites. It’s fine, but it’s one to skip if you have the CD.

Rhythm On The Loose – Break Of Dawn – Catchy vocals and a great tune.

New Order – Blue Monday 95 – The song needs no explanation as everyone knows it. This is a great remix for 1995, twelve years after it was first released.

BT – Loving You More – This was trance before trance was big. Great.

Jinny – Keep Warm – I loved this. I remember hearing it in Mr Smiths in Warrtington and in Valentino’s in Stoke.

Mory Kante – Yeke Yeke – I remember trying to make myself like this. It hasn’t aged well.

Berri – Sunshine After The Rain – I loved this song and then hated it for a while as it was overplayed massively. It is an absolute classic. It was originally released in 1994 when I first loved it. By the time it was re-released in September 1995 (this time just by Berri) it sounded even better somehow.

Liquid – Closer – Not one of my favourites. Diving Faces is THE Liquid song that you want to listen to.

The Original – I Luv U Baby – One of my favourite songs of all time. At the time I remember thinking it was quite unusual to have a male vocal on a dance track. It is such a great song

There are more songs to skip over on this CD. But there are some absolute classics.

Reel 2 Real – Conway – Conwy is one of my favourite places in the world. Conway is crap.

Junior Vasquez – Get Your Hands Off My Man – Loved this one.

Androgeny featuring Michael M – I could Be this – There was something strangely appealing about this.

Yosh – It’s What’s Upfront That Counts – This is one to skip. Parts of this are really annoying.

Mozaic – Sing It (The Hallelujah Song) – Very catchy. Well worth a listen.

Mary Kiani – When I Call Your Name – Definitely just an album filler.

JX – Son Of A Gun – Another one that was out in 1994 before scoring a re-release in 1995. It’s brilliant. I also loved You Belong To Me and There’s Nothing I Won’t Do if you want to check out JX’s discography.

Gypsy Queens – Everybody Listen – Possibly the weakest song on the whole album. Skip this.

Hi-Lux – Never Felt This Way – I have still not found this song as a single, a download or on any other compilation. It’s such a great song!

BB Club – Play This House – Not my favourite song on the album but it’s not dreadful.

Sleazesisters – Let’s Whip It Up – Not good. Skip this one.

Ian Pooley – Rollerskate Disco – Don’t bother with this one.

Shiva – Freedom – Not bad. One of the weaker songs on the compilation. But worth a listen.

Honk – Hullabaloo – One for you to skip past.

Mrs Wood – Joanna – A classic. It was released with a Sash remix two years later.

99th Floor Elevators – Hooked – A fantastic song. What a way to end the compilation. Brilliant.